Today is Remembrance Day in Canada. Ottawa is a beautiful place to be, to remember, to be thankful and to honour those who have sacrificed their lives in the service of their country.

Not all stories of the military are tinged with sadness. Some bring a chuckle and hearty laugh.

My father in law tells of his required time in the military. His stories are the best.

When it came time for inspection, every crease had to be perfect, every item in place. The beds, shoes, uniform, everything had its' proper place. My father in law was quite the dedicated recruit and had hit upon a system to keep the high standards that were expected of him. In his foot locker, he had a board. On that board he had glued perfectly folded clothing. Once and awhile he had to dust the top layer, but the top layer was perfect every time his locker was inspected.

Smart man and pretty brave too.
Posted by BC at 1:15 AM No comments:

Usually I don't write about things so painfully personal. This was hard, I broke down and cried after writing it.

I’ve tried to write about my father in law struggling with Parkinson’s and making muffins for my mother in law. As I wrote, I realised it sounded maudlin instead of a source of love and joy. There is a beauty, joy and privilege in having my father in law in my life. It’s been a transformation for this family to watch this boisterous gentleman as he slowly bends before Parkinson’s like a shuffling human question mark.

There is a trail of my father in law in this house. This time it was broken eggs, spilt coffee, and broken dishes, but he always did leave a trail.

Every time he came to visit, he kept busy building something. A cedar deck, a book shelf, a playhouse for the children…. As his Parkinson’s progressed, his projects became less ambitious. He painted and paint dripped down the walls. He fixed baseboards, which are still crooked.

This time there was no building, no painting, just some baking. He baked special muffins for his wife because she is unable to eat anything made with wheat.

My husband and I kept an ear out for him, as his coordination is not very good and he often drops things. Once and a while, we would hear the thump of a dish hit the ground or a spoon clatter. Unless something breaks, we stay out of the kitchen.

Then the smell of burnt sugar came wafting out of the kitchen. My father in law had put the muffins in the oven; it’s difficult for him to fill the muffin tins, so batter usually ends up on the bottom of the stove.

When I came into the kitchen, I asked him how he was doing. “Not too good, I dropped some egg.” There was flour, batter and egg on the floor, on the counter, the table… his efforts were spread everywhere.

(It drove us crazy 15 years before to have a trail. What we thought was sloppiness at the time, was the beginning of Parkinson’s disease.)

“It’s okay, we’ve dropped many eggs in this kitchen”. My father in law sat at the table and carefully scraped batter off the table top while I cleaned. He then hobbled over to the stove and took out the tray of muffins. In one corner was one gigantic muffin, in the other corner were some tiny slightly burnt muffins and between them, were muffins of every size.

It may seem sad, but it isn’t. We have the chance to love my fther in law by treating him with dignity and quietly cleaning up his trail. There is a profound joy in accepting the honour of our role… and it is a privilege to be trusted with caring for someone vulnerable.

I am humbled by my father in law. Every day is a constant struggle to survive and instead of giving up, he put all his effort into baking for someone else.

It is a privilege to clean up after him and one which I will not enjoy much longer. My father in law passed away yesterday June 20, 2012. We were very blessed to have him in our life.
Posted by BC at 8:44 AM 6 comments: 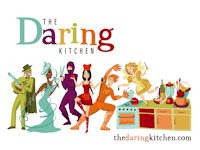